Bored to death of the same old ordinary paths, of touristic sightseeing and well-known landmarks? Thanks to the Catacombs, you will experience the thrill of underground haunted tunnels, along with the unusual  and breathtaking beauty of old Parisian skeletons. 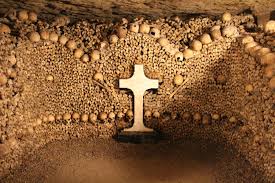 The Catacombs are one of the most gruesome and macabre sights in Paris. Full of endless underground tunnels  packed with skulls and bones, they represent the solution for aesthetic and hygienic problems due to the overflowing cemeteries during the XVIII century.

Built in 1810, the Catacombs contain a great number of exhumed bones, which are stored in lines. A narrow stairway will lead you down 130 steps  to the tunnels, where you will have the opportunity to reach the barely illuminated and eerie tunnels. Then, you will have the unique chance to walk through the 1.5 km underground tunnel  where millions of skulls from Parisians lie. The tour takes around 45 minutes.

The catacombs have been very important during the WWII: there, since 1944, the Résistance used to meet and to plan attacks, far beyond  Nazi control. Interestingly, nowadays thorughout the catacombs you may also find thrill seeking cataphiles, who wander through the tunnels and look at the lines of skulls as if they were in a sort of amusement park: however, differently, if caught, they are fined! 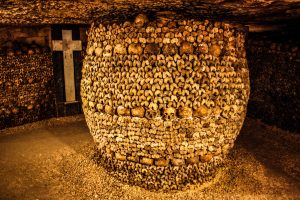 This labyrinth, which contains bones from the 11th to the 19th century, has been built following the examples of Rome and Naples. The abandoned quarries, now used to house skulls and bones, has been packed to create space for new districts after numerous complaints about the risk of infection for the inhabitants, caused by the old Cemetery of the Innocents (close to Saint-Eustache, in the area of Les Halles)

One of the most intriguing and interesting attractions in Paris, the Catacombs have been visited by famous people such as Napoleon III and the Emperor of Austria. Take a walk through the narrow tunnels and explore the underground area where the dead rest in peace and the thrill seekers look for excitement!

HOW TO GET THERE 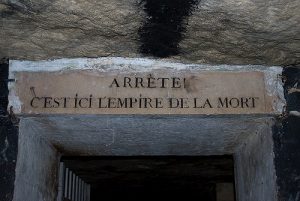 PRICES (valid on the spot) 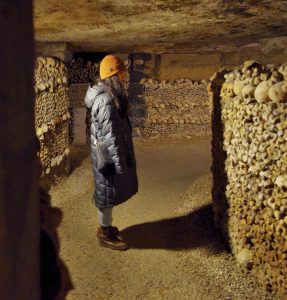 Free admission for youth until 17, disabled and those who accompany them, job seekers and those who have an income support. Furthermore, the entrance is free for retired Paris employees, professional visual artists and curators, as well as ICOM and ICOMOS members, journalists and city of Rome inhabitants (Paris twin city).

Don’t miss out this once-in-a-lifetime experience and enjoy the catacombs as soon as possible, before it’s too late…

How to plan group trips to Paris?