The Top 3 Souterrains in Paris

Paris offers as much to discover overground as it does underground and I am not talking about its famous Metro system, which by the way was the first subway system in the world. Today you can find 18 mysterious metro stations that are not being used anymore. Besides these underground attractions we are presenting to you the Top 3 Souterrains in Paris. 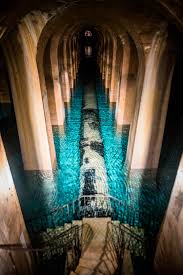 The first of our top 3 souterrains in Paris is the Réservoir de Montsouris in the 14th district of Paris was built in the years from 1868 to 1873 by the engineer Eugène Belgrand. As one of the 5 reservoirs of the Capitals it provides the water for about 20 % of all Parisians. Besides its practical use as storage for clean water it has also gained the nickname “Cathédrale d’eau” (Water Cathedral) due to its unique architecture and its majestic pillars. Up until 2001 anyone was able to visit the Réservoir de Montsouris but after new safety standards were required the reservoir had to close its doors to visitors. Only in 2014 during two days (journées de patrimoine) the “water cathedral” opened again for visits. The reservoir has two floors each sized 60 ooo square meters and fits a maximum of 202 000 cubic meters of water to secure the water supply of Parisian households. From the outside one can barely guess whats going on inside this water reservoir. It is covered by a large field of grass and flowers and all that is above ground are two small resembling buildings that really do not indicate the size and importance of the reservoir. 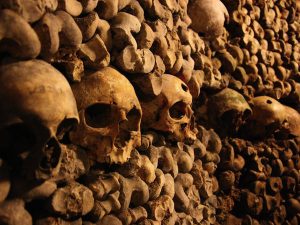 One of the most visited attractions in the french capital can be found underground. The catacombs of Paris were created in the 18th century to relieve the overcrowded cemeteries within the City. Today, bones of more than 6 million people are buried in the ossuary. When visiting the catacombs at Denfert-Rochreau Station you will find these bones carefully piled on each other creating a sort of artistic appearance. Only after Louis-Étienne Héricart de Thury from the Paris Mine Inspection Service transformed the unorganized piles of bones  that it became a real mausoleum. Since then in 1810 the catacombs have been open for visits up until today with only a few short breaks. Today this one is one of the top 3 souterrains in Paris you can visit every day but make sure to buy your fast track ticket online to skip the queuing on site. 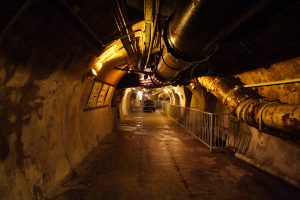 “The city below the city” This term comes from the use of actual street names and house numbers that were placed underground in the sewers. So, there is quite literally a second Paris underground. The first sewer system was established in Paris in 1370 under the “Rue Montmatre”. You can follow the history of the sewers and visit the sewer museum at the Pont de l’Alma. The accessible part extends to a 500 meter path underground where you can discover the historic water cycle of Paris and many machines of which some are still in use. As the oldest and still existing sewer system “Les Égouts” earn their place in the top 3 souterrains in Paris.