Discover Paris Landmarks to prepare for your visit in Paris

Paris is renowned for its cultural places and beautiful landmarks full of history just like the Eiffel Tower which was originally created for the universal exhibition.
Here is a selection of the top 6 Paris Landmarks that you should not miss when visiting Paris for the first time. 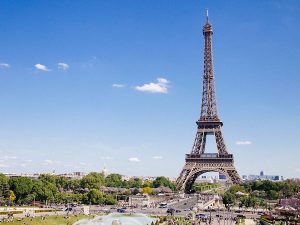 The Eiffel Tower is France’s national emblem but was once scorned by the French people and intended to be destructed after the universal exhibition of 1889.

Today this 324 meter (1,063 ft) tall landmark, made of iron, is the most-visited paid Paris Landmark and a very romantic place where many proposals are made. 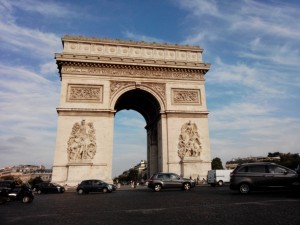 The Arc of Triomphe is another one of Paris landmarks.
Ordered by Napoléon I in order to celebrate his military victories, its construction began in 1806 and ended in 1836. It stands in the middle of the “Charles De Gaulle” square, at the junction of the 8th, 16th and 17th neighborhoods of Paris, near the Champs-Elysées.
Now, it shelters the tombs of the unknown soldiers, where every day an eternal flame commemorates all the fallen soldiers, with a ceremony between 6 and 6:30 PM.

The Pantheon is located in the Paris Latin Quarters, near the Luxembourg Garden.
Built as a church in the XVII century, and after several modifications, this impressive Paris landmark has now the vocation to honor those who have marked France history.
Jean Moulin, Voltaire, Jean-Jacques Rousseau, Victor Hugo, Emile Zola and Jean Jaures are for instance laid to rest in the Pantheon.

The Cathedral of Notre Dame

One of the most famous Paris Landmark is with no doubt, one of Paris most beautiful monuments. 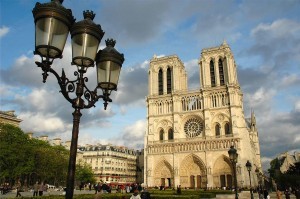 Its construction started in 1163 but lasted over 2 centuries.
This gothic masterpiece has a very symbolic place in Paris, along with the cathedral of the city of Reims, and are the most famous holy places in France.
Napoléon I was coronated emperor here and nowadays, religious ceremonies often take place here, like for the burial of the French Presidents: Charles de Gaulle, Georges Pompidou, and François Mitterand.
This archdiocese cathedral is also famous for its appearance in Victor Hugo’s novel “Notre-Dame de Paris”, published in 1831, which inspired Disney’s movie, “The Hunchback of Notre-Dame”.

The Basilica of Saint-Denis 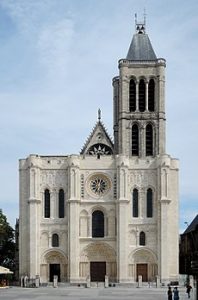 The Basilica of Saint-Denis is a gothic style church located in the center of the city of Saint-Denis, 5 km North of Paris.
From its construction in the XII century, it was dedicated to hosting the remains of the Kings and Queens of France.
Nowadays, this burial place reunites the rest of 43 Kings, 32 queens and 10 servants of the monarchy.
If you want to discover France former Kings and Queens, we definitely recommend visiting this beautiful monument.
Here, you can learn more about the Robertians, the Capets, the Merovingian and other Frankish families who once ruled over France. 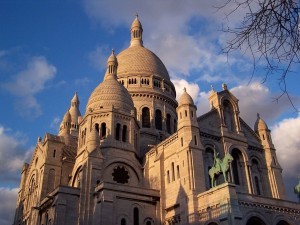 The Basilica of the Sacred Heart of Paris is a roman catholic church located in the 18th arrondissement of Paris.
Its construction began at the end of the 19th century and was inspired by byzantine-roman style churches like the Périgueux and St Mark’s Basilica in Venice.
Today, the Sacré Coeur is another one of the worthy Paris landmarks, popular for its elevated position which provides a wonderful view over the capital city.

Now that you have discovered Paris Landmarks behind your screen, do not hesitate to come discover them in person!

How to Avoid the Lines in Paris