The Village and the Bay

Both the Village and the Bay are important elements of Mont Saint-Michel: they contribute to create the magical atmosphere of the island and, above all, they offer breathtaking views. 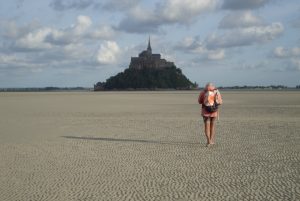 The Bay of Mont Saint-Michel has always helped monks to live in solitude. Before the causeway was built, Mont Saint-Michel was an island and pilgrims would approach only through the mudflat, since the tide was too fast and high. In order to avoid the tourist masses, walk barefoot on the mudflat around the island but, first, duble-check the tides and bring someone with you! 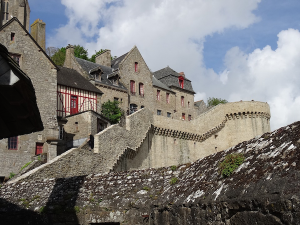 The Village lies below the Abbey and above the lower medieval  fortifications: there, you will find typical restaurants, shops, hotels and sights. You can enter the island through a stone arch (or, during high tides, through a door in the central tower) and reach the Rue Principale: from here, you will have access to the Abbey and to all the sights within the island.

Mont Saint-Michel is always packed with tourists, but don’t forget that it has always been like that, even in the Middle Ages! Try the famous omelette at the restaurant Mère Poulard and go uphill following the ramparts in order to reach the Abbey. 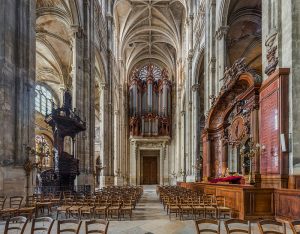 The history of Mont-Saint-Michel starts in 708, when Archangel Michael appeared in a dream to Aubert, Bishop of Avranches, and asked him to build a church in his honor on the rock that from then on would be known as the Mont-Tombe. The next year, a church was devoted to him and the mountain became known as Mont-Saint-Michel. In the XIVth century, walls, towers and battlements were built to protect Mont-Saint-Michel against the English during the Hundred Years’ War. During the French revolution, it was used as a prison and continued to serve as such until 1864. Since 1874 it is listed as a French historic monument and was classified as a UNESCO World Heritage site in 1979. 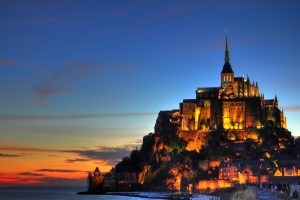 Mont-Saint-Michel is a village full of history. Once you enter Mont-Saint-Michel, you will find yourself on the main road where there are shops, hotels, restaurants, museums and other amenities for sightseers. Take a stroll through the narrow streets, enjoy the view, and immerse yourself in the medieval era thanks to the area’s architecture (roman and gothic). On your way, you can visit Saint-Pierre church and see the cemetery where Mère Poulard (known for her famous omelet) and her husband rest, you will also pass by their old house which now serves as a hotel.

If the tide allows, walk on the bay of the Mont-Saint-Michel to have a magnificent view from below. It is an experience not to be missed. Also, don’t miss the impressive view that the sunset offers you with its golden colors, which are reflected on the Mount and the bay, a particularly spectacular view as the Mount is surrounded by water.