Which cafes in Paris you won’t want to miss?

Paris is considered to be a romantic city. On a cafe terrace, we always see Parisians enjoying the sunshine and talking with their friends. Easygoing and relaxed. If you want to behave like a Parisian, you must step inside the cafes in Paris while visiting the city.

In fact, the first café in Paris appeared in the Saint-Germain-des-Prés district in 1672. We can therefore say this is the cradle of Paris cafe culture. 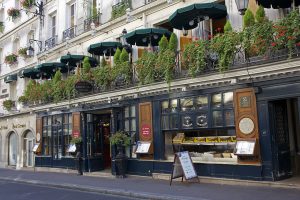 Although the first café in Paris had limited success and closed later, one of its waiter opened a café named Le Procope in 1689, which is still in business. More than 300 years later, Le Procope witnesses all variations of its clients’ life, but also all the changes in Paris. Nowadays, we can stil enjoy a meal at Le Procope but it is highly recommended that you book a table in advance.

Speaking of cafes in Saint-Germain-des-Prés, every Parisian will immediately think about Café de Flore and Les Deux Magots. These two cafes are both celebrated for their famous clientele, especially writers and artists. Georges Bataille, Robert Desnos, Jean-Paul Sartre, Pablo Picasso… they were all frequent patrons and completed many of their works here. After all the stories of joys and pains, pleasures and sorrows, written here, do you really want to pass by these places and not come in ?

Montparnasse, as the heart of artistic and intellectual activities in Paris in the 1930s, prompted a lot of openings of literary cafes.

Le Dôme is the first café opened in Montparnasse and soon became a gathering place for visual and literary artists. However, in 2016, Le Dôme declared a bankruptcy. Even though the owner hasn’t officially announced any closure, you might want to plan a visit quickly and check out this location before your departure.

Today, seafood dishes are kind of its specialties but the prices are quite high (around €80 per person for an hors d’oeuvre and a main course). 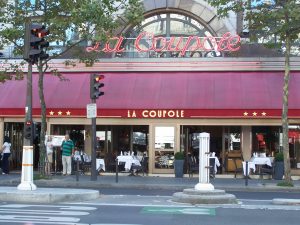 In the beginning, La Coupole has been established to outshine Le Dôme because of the great success of the latter. Located on the same avenue and just 1 minute by foot from the Le Dôme, La Coupole also succeeded to attract a mass of artists, including Sartre, Picasso, Hemingway… In 1988, this cafe was selected to be an historic monument.

If you want to have a meal in this district, we suggest you choose between Le Dôme and La Coupole since their dishes are almost identical. 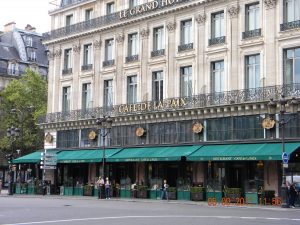 Situated in front of the Opéra, Café de la Paix has a wonderful street view. On the terrace, you can relax with your friends and appreciate the splendid architecture in the meantime. If you step inside the café, you will notice that the whole café is decorated in Second Empire style.

Moreover, it is worth mentioning that Café de la Paix has a complete and carefully selected wine list.

A bit of glossary 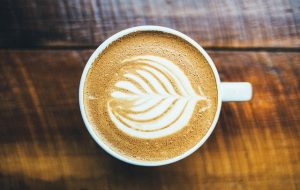 The most simple coffee that you can find everywhere should be “café espresso”.

If you want to order an Americano, it is similar to “café allongé”.

“Thé gourmand” or “café gourmand” is always a cup of tea or coffee (usually an espresso) accompanied by a selection of small desserts.

If you look for a coffee with less milk than a “café au lait”, you may choose a “café crème”.

Last but not least, by ordering a “noisette” which is very popular in cafes in Paris, you will get an espresso with a little bit of milk (less than a “café crème”).

We notice that the chairs on a café terrace are almost all set face towards the street.

They say that people-watching is a national sport in France. So where better than a café terrace to do this “sport”? Hence Parisians enjoy observing the passer-by’s and also the street view when they sit on a terrace.

Our Selection of Typical Parisian Brasseries

10 French Foods You Simply Must Taste!