Presentation of the Museum

Louis XIV decided to build The Hôtel des Invalides, in order to host and take care of the injured soldiers. The aim was quite philanthropist : enabling them to enjoy the rest of their life the best possible in a place they would be taken care of. Then, two museums were created in the Hotel : the Artillery Museum (1796), exposing royal collections and other gifts, and the Historical Army Museum (1896). Only in 1905 did these two museums merge to become the army museum. Today, this almost 10 000m² museum holds about 500 000 pieces so that it is the 3rd global collection, which makes it very impressive and undoubtedly worthseeing !

What you can’t miss 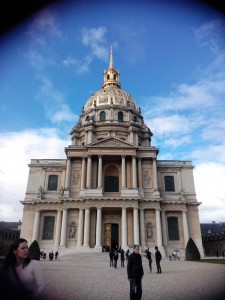 Since the army museum is divided into about 10 sections, we’ve decided to present you those you cannot miss. Let’s start with the most famous one : The Rounded Roof Church.

This dome is the symbol of the Hotel, because of its architectural magnificence. Built in the end of the 17th century, this royal chapel pays tribute to its creator, Louis XIV through its decoration, but it also quickly became a sanctuary. In the 1800s, it began to house the tombstone of two renown Marshalls, Turenne, and Vauban (his heart at least). Recognizable from very far, it is mostly famous because it contains Napoléon 1er’s tombstone. The decoration style is quite stunning, with very few but fancy colours in noble stones (quartzite, granit and marble)… Thus, it has all the elements to amaze you !

There, you will discover the evolution of the weapons used in Europe in this period, in a chronological order. From medieval swords to more modern arms such as guns, you will be invited to approach the unfolding of many European wars, and even to learn about the Asian inheritage of the weapons. 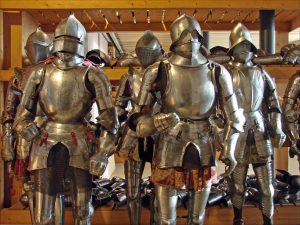 More focused on the French History, you will be revealed the evolution of technologies and war strategies, but also the different political regimes France knew all over this period. You will be able to approach the soldiers’ daily life through their costumes, weapons, and you will also access Napoleon’s personal goods. Besides, the section is renown for the diversity of its collection, so that you will also find more unusual items such as musical instruments or decorations.

The Contemporary District and the Two World Wars

Turning points in the French, but also the World’s History, this district presents a very diversified collection of items showing what these wars were made of in terms of arms, and how they unfolded. You will note the contrast with the first District through the improvement of the weapons, and all the different rooms will make you feel like one of these soldiers. Moreover, there are personal documents such as letters or pictures which undoubtedly won’t leave you unmoved.

Paying tribute to the 18th June Man, the one who liberated France from the Occupation, this district is quite different in shape and content from the others, because it is above all filled with multimedia archives. There are no items but many screens and an infra-red audioguide to dive you into the path and the achievements of Charles de Gaulle, a President of paramount importance in the French History, and who is still deeply rooted in its memory.

If you want more

We advise you to pass by the Cour d’Honneur, in which you will find other pieces of the French Artillery through 70 bronze cannons. You can also visit the Museum of Bas-Reliefs to discover plenty of cities and countrysides models. Finally, if you were pleased by the Charles de Gaulle Historial, you should visit the Museum of Order and Liberation, paying tribute to those who fought through the Resistance for the Liberation of France.

Click in the following link to learn about the cost of the tickets and the opening hours. Note that the audioguides are available in 8 languages. Moreover, if you want to eat, there is a restaurant called “le Carré des Invalides”. Enjoy your visit in the great army museum !

Why should you go to the Grévin Museum? 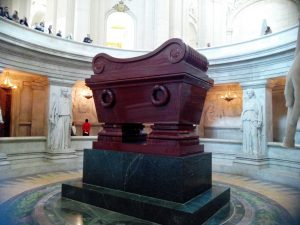 A former hospital for the veterans of King Louis XIV’s wars, the National Residence of the Invalides is nowadays also a museum about the military history of France. There are many things to visit such as the Army Museum (which includes a beautiful artillerie collection), the tiny museum of military maps in 3D, the Museum of Contemporary History (about the 2 World Wars), the Memorial dedicated to Charles de Gaulle and of course the tomb of Napoleon Bonaparte located under the Golden Dome.

How to experience it?

It could take an entire day if you decide to visit everything!

For those who are short in time, you can focus on the tomb of Napoleon and the dome, which you can see in about half an hour only. But if you have more time, and especially if you are a history buff, do no hesitate to visit the rest, and especially the tiny museum of military maps which can be visited in only 15 to 30 minutes.

In summer time, you can enjoy a picnic on the lawns of the Esplanade des Invalides, located just in front. 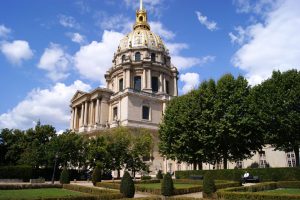 Hours: Open every day, but hours change based on season. View hours here