Situated in the beautiful region of Alsace, Strasbourg lies on the French-German border: for this reason, it offers visitors a unique mix of French and German culture, with typical medieval houses and sights. 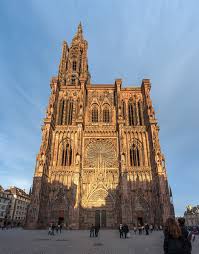 Bordering the West bank of the Rhine river, Strasbourg provides Franco-German culture, ambience and sights: for instance, the beautiful Gothic Notre-Dame Cathedral, with its astronomical clock and its towers, offers a unique medieval atmosphere, while the famous historic quarter called Petite France offer a great number of channels and medieval houses. There, you can follow the Barrage Vauban – a defensive structure built on the river – and enjoy all the typical houses which are now part of the UNESCO World Heritage.

The town houses several European institutions, such as the Council of Europe and the European Parliament. The centre of the city, called Grand Île, is a UNESCO World Heritage Site: although always disputed throughout centuries, Strasbourg has been a crucial cultural, historical and social bridge between Germany and France. 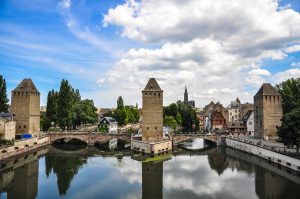 The city absorbed the Germany influence in its stunning architecture and, as you walk into the town, you will feel as if you are entering a childhood fairytale village. It is simply picturesque. Enjoy a glass of wine from one of the famous Strasbourg caves or a cold mug of beer from one of its equally spectacular breweries. If visiting in the winter, you can also go to the Christmas fair, a real treat during the holiday season.

Although many castles and churches have been destroyed in 1944 during the Allied bombing raids, the main ones are still intact or have been renovated: thus, Strasbourg can still offer, especially these days, a unique and amazing insight into the Franco-German culture and into the Gothic and Romanesque atmosphere of the Middle-Ages.