When we talk about the Seine, perhaps all of us will have a romantic image with elegant Parisians walking along the river under the sunshine. However, the River Seine is not that calm this winter. In fact, the Seine is sometimes quite precarious because of flooding. 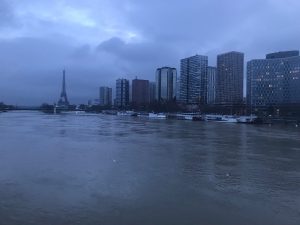 Since January 2018, Parisians have been warned as the Seine is flooding and its water level keeps rising. Although the actual situation is not as severe either as in 1900 or as in 2016, we wonder just how high the Paris flood can reach at this time and when this natural disaster will mark its end. The Seine River rose up to 5.88 meters on the Sunday 28th and went down to 5.33 meters on the Monday 29th. Therefore, some say that the water level has now reached its peak and will proceed to fall down. However, as no one can really control the nature, everything is far from conclusive. If it is to rain a lot in the coming days, it is not difficult to imagine that the Seine River’s flood will keep on being aggressive.

Even though the city council of Paris took a lot of measures to guard against the Paris flood, such as planting trees to absorb water, everytime there is a flood, it will severely get in the way of Parisians’ life. 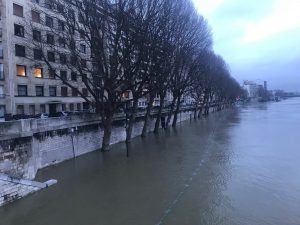 The sidewalks along the river where Parisians love going for a stroll now have been completely inundated. The week of 22nd January, the public transport system has been affected: the RER C has been closed not only between Gare d’Austerlitz and Avenue Henri-Martin, but also between Viroflay-Rive Gauche and Saint-Quentin-en-Yvelines. According to the RATP company, it is said that the partial closure of the RER C will continue until the 5th February but nobody knows when exactly RER C will totally return to normal. If you are planning to visit Paris and to take RER C, it would be better to look for another metro line in order to insure your travel plan. 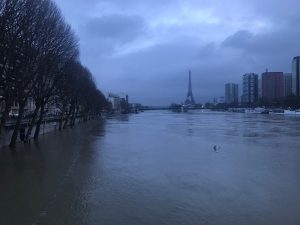 Moreover, because of the Paris flood, no boat can pass under the bridges so all the Seine cruises have been suspended until the water goes down to the normal level. From now until the near future, you need to contact the cruise companies in advance to make sure if they will still provide cruise service.

Last but not least, please notice that it is strictly forbidden to go boating or swimming in the Seine River, especially in this dangerous moment with the flood. Not only can you be caught by the police, but also you risk your life by doing that.

A review of Paris’ dinner and lunch cruises