Paris is under the protection of saint Geneviève (full for Jenny of course) since the 5th century.

Geneviève was born in Nanterre (a suburb of Paris) around 420. She was only 7 when the bishop of Auxerre, Saint Germain, noticed her within the crowd that surrounded him and foretold the crowd this little girl was chosen by God to accomplish “great things” in the future. Was that the beginnings of the famous Coué method ? Anyway, Geneviève decided from then on to dedicate her life to God.

A few years later, in 451 precisely, the people of Paris (whose name back then was Lutece) heard about an imminent catastrophe : the Huns, these fierce warriors, were about to invade Paris, led by their chief Attila, (remember, the self-proclaimed “plague of God”, who used to say very humbly that “where my horse walked, the grass will grow no more” ). The people began to panic and to prepare to run away from the city, but Geneviève, whose fortitude and force of persuasion was apparently really impressive, calmed down the people and gave them courage, assuring them the Huns would not ravage Paris. And indeed, Attila spared the city and changed his itinerary. Some rumors say that clever Geneviève may have misled the Huns about a fictitious epidemic of cholera ravaging the region, to discourage them… Anyway, whatever she did was brilliant and prevented the people of Paris from exposing their lives by fleeing outside of the city. From then on, people thought the salvation of the city was due to Geneviève’s prayers, and they started to venerate her as a saint.

But as one time is not enough, she decided to save Paris a second time : in 465, another war leader, Childeric 1st, besieged Paris. But our heroine succeeded in joining the city of Troyes, in the nearby region of Champagne, and in sending back food to Paris several times on boats on the river. The story does not say if she send back Champagne… But Paris was saved again !

Who can refuse something to such a heroine ? Not king Clovis anyway, the first Christian king, from whom she obtained the construction of a new church dedicated to St Peter and St Paul, on the mount Lucotitius… nowadays called Mount Sainte Geneviève, in the 5th arrondissement of Paris !

She died quietly around 510 and was buried in this same church, were she was joined a few years later by King Clovis and his wife Queen Clotilde. The remains of this church (turned later into an abbey), and especially the bell tower known as “Clovis Tower”, are nowadays part of the famous high-school Henri-IV.

Let’s make a big flash forward in time. 1744 : king Louis XV°, very ill, made the vow that should he be saved, he would built a new church in Paris dedicated to Sainte Geneviève. He recovered, and the architect Soufflot was charged with drawing a new map.The remains of the saint were moved for protection to another city in France when the Normans first tried to invade Paris. Some years later, in 853, during a second attempt of invasion from the Normans, the citizens brought them back into Paris, and the presence of the saint gave courage to the fighters who pushed back the invaders. Paris was saved again : there is a saying in French that says “there is never a 2nd time without a 3rd time…” !

But the French Revolution was very anti-clerical. All that was sacred to God and Saints was to be sacred to mankind. That is how the former church Sainte Geneviève was turned into… the Panthéon ! “To great men, the grateful country”, reads the motto on the front of the Pantheon. They did not really consider great women back then, did they ?…

Most of the remains of the saint were burnt during the Revolution, but some parts were saved from the flames, and where later founded and transfer to the nearby church of Saint Etienne du Mont, where a chapel is nowadays still dedicated to Sainte Geneviève.

For the story to be complete : there was another church dedicated to Sainte Geneviève just in front of Notre Dame, but it was destroyed in 1747. We can still see the place where it stood marked on the square.

In 1928, the French sculptor Paul Landowski made a statue of the saint to be erected on the bridge of la Tournelle. From up there, Saint Geneviève still seems to be looking over Paris that spreads to her feet… 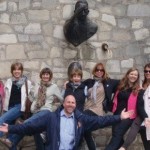 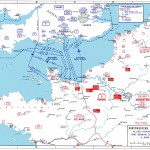