-Visit the must see monuments

-Avoid tourist traps and discover some less visited places to see in 4 days in Paris. 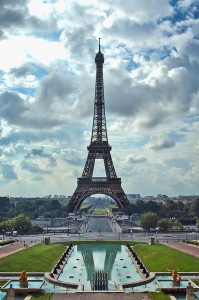 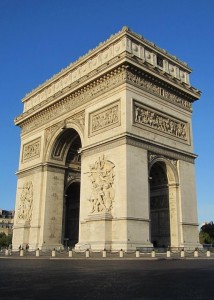 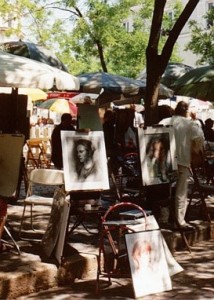 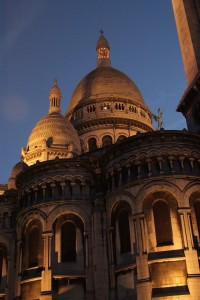 Constructed for the 1889 World’s Fair held in Paris, it has since become the worldwide symbol of Paris.  A trip to Paris without going to see the Iron Lady up close is a trip incomplete.  If you want to climb the Eiffel it is strongly suggested you purchase tickets in advance to avoid waiting in a 30 minute to 2 hour line.

Commissioned by Napoleon Bonaparte in 1806, it was not completed until the 1830’s, some 10 years after his death.   It has been the scene of many triumphant entrances into Paris, including the French and Allied forces after the liberation of Paris in the Second World War.  The annual Bastille Day military parade always starts at the Arc de Triomphe.  If you choose to climb the Arc de Triomphe it costs 8€.

From the Arc de Triomphe you can either choose to explore and stroll down the famous Champs Élysées or catch the metro line 1, station Charles de Gaulle Étoile, direction Château  de Vincennes and exit at Hotel de Ville.

The famous gothic cathedral of Paris is located on Ile de la Cité and was constructed beginning in 1163. Notre Dame is most famous for her flying buttresses which are located along the sides and back of the cathedral.  Equal in architectural marvel is the cathedral’s interior which should not be missed.

Notre Dame is as central as it gets, so this would be a perfect moment to find a place to eat.  A variety of cafes can be found on Ile de la Cité (the island Notre Dame is on) or you could cross the river to the south and find a large number of cafes, where you are certain to find one that fits your budget and appetite.

After lunch head over to the metro stop St-Michel or Cité (depending on where you went for lunch) line 4, direction Porte de Clignancourt.  Take this metro to Barbès Rochechouart where you will get off and transfer to line 2, direction Porte Dauphine for just one stop. Exit at Anvers.  This metro trip will take about 30 minutes.

Montmartre is bursting with sights to see.  Start off with the famous basilica Sacre Coeur.  Constructed between 1875 and 1914 it features a distinctive Romano-Byzantine architectural style that is a must see.  Not only is the basilica beautiful, but the view of Paris seen from its steps cannot be missed.  While very touristy it’s worth at least passing by Place de Tertre to see all the artists, before continuing on to quieter streets. Enjoy the real charm of Montmartre by wandering the backstreets of this arrondissement to experience the inspiration of Picasso and other famous artists.  Wander your way over to take a quick picture at the Moulin Rouge windmill.

4:00 Get on Pigalle, line 12, direction Mairie d’Issy, exit at Assemblée Nationale.  From here the Musée d’Orsay is a short walk.

Once a bustling train station this building now houses art from art from between 1848-1914. Most famous for it’s large collection of impressionist and post-impressionist work it is a pilgrimage for impressionist enthusiasts.  Entrance 12€.

One of the more famous cabaret shows in Paris, this spectacle is must see.  Diner and show tickets start at 165€ per person. 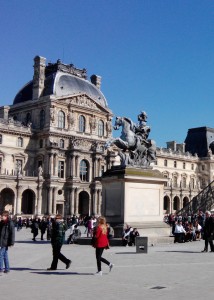 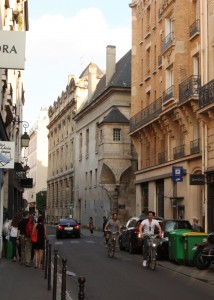 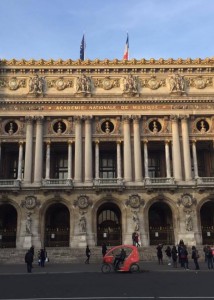 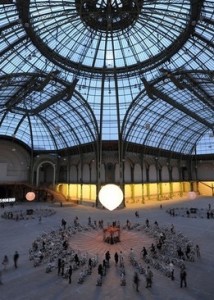 Home to one of the world’s largest art collections, one of the most famous masterpieces is Leonardo da Vinci’s Mona Lisa.  There are nearly 35,000 objects exhibited, so after viewing the Mona Lisa make sure to leisurely enjoy the endless masterpieces offered in the Louvre’s superb collection.  Admission is 15€.

The lunch boat tour allows you to take a pause and eat while still visiting the city.  Seeing all of the famous monuments from the Seine provides a whole new perspective and offers unique pictures opportunities.  Lunch river cruises cost around 41€.

Next Stop: The Marais

To explore the Marais for a bit get off at metro line 1, stops Hotel de Ville or St-Paul and head north away from the river Seine.

This neighborhood is know for the small twisting streets and quaint little boutiques and cafés.  In the Jewish part of the Marais there are various Falafel and crepes shops that are worth stopping by.

The Musée des Arts and Metiers is a museum dedicated to scientific inventions and innovations.  Certainly a lesser known museum in Paris, but one that is still worthwhile to explore.  It includes well known inventions like the gramophone, as well as known wonders such as a helicopter prototype developed by the grandson of Louis Vuitton.  Entrance 8€.

Built in 1875, this buildings embodies the spirit of the time and is perhaps best known as the setting of  Gaston Leroux’s novel Phantom of the Opera. The interior is decorated in the sumptuous baroque style that leaves visitor awed by the lavish details.     Entrance fee is 11€.

Enter the metro at Opéra, line 8, direction Balard, get off at Concorde, transfer to line 1, direction La Défense, exit at Champs Élysées Clemenceau.

The Grand Palais is unique among galleries since it does not boast of fixed collections, so there is no “must sees” here.  Rather come here for the pleasure of in depth exploration on a single subject, almost assuredly unfamiliar before you visit.  Ticket prices range by exhibit, but generally do not exceed 15€.  The Grand Palais closes at 8PM. 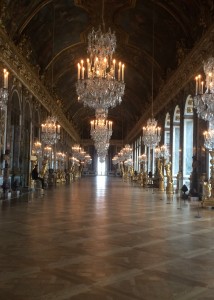 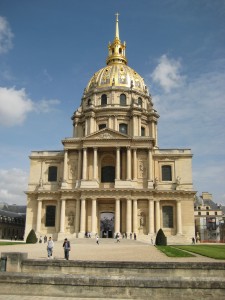 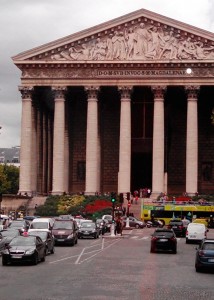 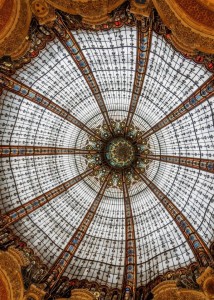 To get to Versailles you will need to take the RER C, direction Versailles Chateau-Rive Gauche.  The RER C trains come approximately every 15-20 minutes and will take 30-45 minutes (depending at what station you get on the train at) to arrive at the Versailles train station stop.  You need to allow 15 minutes walking time from the train station to your arrival at the entrance gate.

Built primarily by Louis XIV in the 17th century, the Chateau of Versailles is home to the famous Hall of Mirrors, Marie Antoinette Hamlet, and the vast gardens of Versailles.  For entrance to the entire domain it costs 18€.

Once you have finished lunch, around 1:00 PM return to the train station to take the RER C back to Paris.

Take the RER C to the stop Invalides.  From here you will have a short walk over to the Invalides.

Built by one of the same architects that built parts of Versailles, the Invalides were originally built to house injured military men during Louis XIV’s many wars.  Today it houses the Musée de l’Armée and most famously the tomb of Napoleon.  Entrance costs 11€.

Following the Invalids walk back to the Invalides metro stop and get on the line 8, direction Créteil  and exit at Madeleine.

Originally built by Napoleon Bonaparte as a temple to the glory of his army, however following his fall from power, it was dedicated as a church.  Unique for its very distinctive neo-classic architecture, it was inspired by the Roman temple the Maison Carée located in Nîmes, France.

Return to the Madeleine metro on line 8.  Continuing in same direction (towards Créteil) and go one stop to Opéra.

The Galeries Lafayette is just a short walk behind the Opera.  Take a moment to admire the art nouveau glass dome in the center, then begin your shopping experience. Once you have finished shopping take the escalator to the roof to enjoy a unique view of Paris. 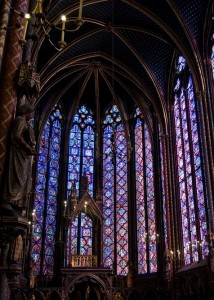 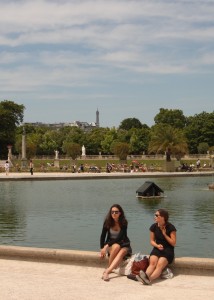 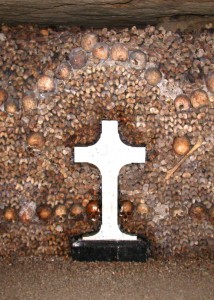 This stunning gothic chapel is located on Ile de la Cité just one block west of Notre Dame.  It was built in 1248 by Saint Louis to house the crown of thorns, a relic, he brought back from the Crusades.  The Most magnificent aspect is with without a doubt are the 15 enormous mid-13th-century stained glass windows, which on sunny days create a breathtaking colorful kaleidoscope effect.  The combined ticket for visiting Sainte Chapelle and the Conciergerie is 15€.

Located next to the Sainte Chapelle, the Conciergerie is part of the old royal residence on Ile de la Cité.  It is most famous for being Marie Antoinette’s place of imprisonment before being guillotined during the Reign of Terror.

Enter Cité, Metro line 4, direction Montrouge, get off at Odeon, transfer to Metro line 10, direction Gare d’Austerlitz, exit Cluny-La Sorbonne, take exit 3 rue Saint-Jacques. t From the exit cross the street and continue up rue Saint-Jacques for 4 blocks until rue Soufflot.  The Pantheon will be on the left.

The Pantheon is most well known as the final resting place for some of the most famous Frenchmen from the 19th and 20th centuries.  Here you can visit the graves of people such as Voltaire, Emilee Zola, or Pierre and Marie Curie.  Aside from the necropolis the walls are adorned with paintings and statues that celebrate important moments in French history.  Admission is 7€.

Exit the Pantheon and walk down rue Soufflot to arrive at the Luxembourg Gardens.

Enroute, grab a sandwich from a nearby boulangerie and take it to the Luxembourg Gardens.  Pull together some chairs or sit down on a bench and take part in a favorite Parisian pastime, lunchtime people watching.

Exit the garden to the north along Rue de Vaugirard and then take rue Férou continuing north to arrive at the open square in front of Saint-Sulpice.

Perhaps best known for its appearance in Dan Brown’s Da Vinci Code novel and movie, Saint Sulpice is a beautiful classically built 17th century church.  If you are visiting Paris on a Sunday we highly recommend staying after the final mass to enjoy the short organ concert performed on one of Europe’s finest 6,600-pipe organ.

Return to Metro line 4, Saint Sulpice, direction Montrouge, exit at Denfert-Rochereau.  Directly across the street is the Catacombs.

From 1786 until 1814 the Catacombs received bones from cemeteries all around Paris to relieve overcrowding and unsanitary conditions.  The relocated bones were arranged to create striking patterns on the walls.  This tour might sound slightly morbid, but it is in fact very interesting.  The only drawback is the Catacombs popularity can cause wait times up to an hour and a half.  The cost of entry is 12€.

As dusk begins to falls (time will change according to the season of your visit) head over to the Montparnasse Tower.  Metro lines 4, 6, 12, and 13 all stop at Montparnasse Bienvenüe.  At the tower you will ascend via elevator to the 56th floor from where you can enjoy a drink and a panoramic view of Paris, as the City of Lights begins to glow.  Make sure to turn your attention to the Eiffel Tower on the hour (from 8pm-midnight) as the Iron Lady sparkles and dazzles during the first 5 minutes.  A perfect way to end your 4 days in Paris.  Tickets cost 15€.

Paris in 4 days all inclusive

Paris in 3 days all inclusive

Paris in 2 days all inclusive

Paris off the beaten path