Étretat is a commune in Normandy (North-East of Le Havre) best known for its chalk cliffs. Very similar to those which can be found in Dover, these cliffs soar above the gravelly beach and form natural arches and complex formations. 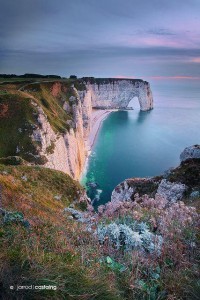 Built as a simple fishermen’s village, Étretat is now one of the most renowned and beautiful beach resort in France: thanks to its white cliffs, the shingles and the natural arches, the town is the perfect destination for tourists from all over the world.  The Étretat chalk cliffs are made of different varieties of chalk and rise from 230ft to 300ft above the sea level.

The most unusual and interesting formation is, without a doubt, the so-called Needle (in French, “Anguille”), which rises 70 metres above the sea: an underground river and the natural erosion created, throughout the years, these natural structures, which are now the main attraction of Étretat and one of the most impressive and magnificent natural landscapes in France. Walking along specific trails, you can enjoy vertiginous routes with sensational views over the ocean: interestingly, you can recognize these cliffs, the arches and the “spires” from countless paintings by Impressionist artists like Boudin, Courbet and Monet, who were attracted by the breathtaking and unique landscapes.

Also, the cliffs were used as a special setting by the writer Maurice Leblanc, in 1909, for the novel “The Hollow Needle” (in French, “L’aiguille creuse”), which features one of the most famous character in literature, the gentleman thief “Arsène Lupin”. 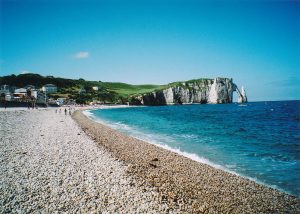 The gravelly beach, surrounded by the cliffs, is well protected from wind and tides: it is one of the favourite beach resorts in France and tourists from all over the world come there in order to relax and enjoy all the beautiful landscapes that can be found; however, during winter time, the beach regains its “wild” form. Gravel and stones are necessary to the preservation of the beach, since they protect  it from atmospheric agents.

A long walkway-dam called “perrey” divides the beach from the village: it used to protect Étretat from dangerous tides. Besides, the old sea front has been destroyed during World War II in order to better defend the coast. 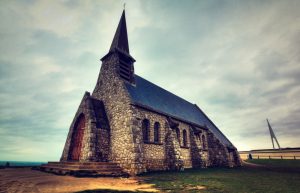 The small village is full of tiny cafés and cosy restaurants. However, the most interesting part of the city is what can be called as the “Old Town”: there, you can find  the impressive church of Notre-Dame, built in the XII century and now historical monument. The Norman Gothic style and the “lanter-tower” highlight the uniqueness of the building: moreover, the Roman façade makes the structure even more characteristic, underlining an amazing mix of cultures and architectures. Close to the church, you can also find a war grave, the “Étretat Churchyard”, which contains 264 Commonwealth and one German burial from the First World War. 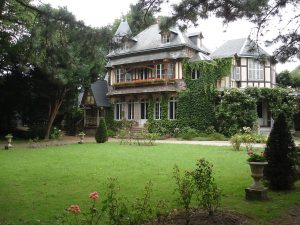 In Étretat, you will have the chance to find several  beautiful châteaux, manors and villas: first of all, the so-called Clos Lupin, in rue Guy de Maupassant (interestingly, another artist who spent most time in the town…): the house, where Maurice Leblanc used to live, is surrounded by gardens and flowers (the name “Lupin” comes from the flower called “lupines”, in French “lupin”). The house is now a museum, where you can find interesting Lupin-style enigmas. Then, you can find the Manoir de la Salamandre, a typical old regional house, similar to those that can be found in the Pays d’Auges, an area in Normandy: it is a great illustration of the architecture of the region. Finally, you can also take a look at the Villa Orphée, built by the composer Jacques Offenbach: from there, you will have a beautiful view over the cliffs.

Last but not least, Étretat is also known because of the “White Bird” affair, where two pilots, in 1927, tried to make the first non-stop flight from Paris to New York: however, after the departure, the biplane disappeared in the ocean. 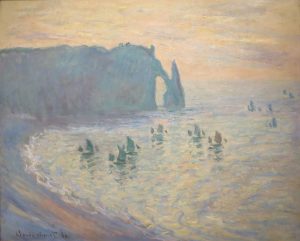 Étretat is about 50 minutes by car from Honfleur, via Le Havre. You can easily go there by bus (from 1 to 2 hours), starting from Le Havre’s “gare routière”, adjacent to the train station.