For top splendor, you will not find better than Château de Chambord. The château is a perfect example of French Renaissance. This is the largest and most visited in the Loire Valley.
The multilingual audioguide is worthwhile (€ 5 for adult / € 2 for child). Take a free map at the entrance, to explore the 440 rooms, linked by 84 staircases. The castle is also surrounded by the huge hunting reserve, Domaine de Chambord, one of the largest park in Europe.

The château was built by François Ier in the XVIth centuryIt turned out to be one of the most ambitious (and expensive) projects initiated by a French King. It took 30 years to build the château, mostly because of financial problems, design setbacks and military engagements. Some famous people took part of the architectural project, such as Leonard da Vinci for designing one of the masterpieces of Chambord, the double-helix staircase. You can also admire the chimneys, turrets and staircases. 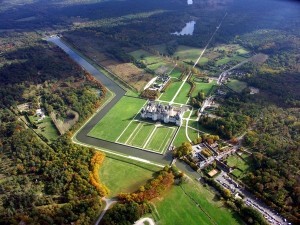 Despite its apparent complexity, the construction of the château follows basic mathematical rules: each section is arranged on a system of symmetrical grid. The rectangular keep stands at the centre, crossed by four great hallways and at each corner stands of of the four bastions. The most interesting rooms are on the first floor: king’s and queen’s chambers. However do not expect to see much furniture in Chambord.