0 Comment
ParisByM
Bastille Day, Things to do in Paris 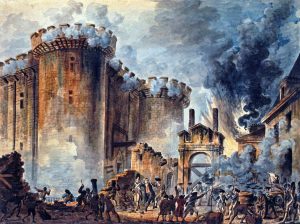 On July 14th, 1789, the fed-up bourgeoisie stormed the Bastille prison to protest the unjust rule of King Louis XVI and Queen Marie Antoinette. This successful revolt by the people of France marked the beginning of the French Revolution and the shift from absolute monarchy to republic.

How to Celebrate Bastille Day in Paris

The capital of the French Republic, Paris offers a number of fantastic ways to celebrate the French national holiday. Large public events featuring food and dancing are offered all night long and many attractions offer extended hours and free admission. Check out our list of where to celebrate Bastille Day in Paris! 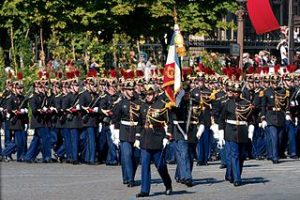 On la fête nationale, the iconic Champs-Elysées becomes a patriotic symbol of French national identity. Visitors can line the streets from the Place de l’Étoile to the Place de la Concorde to see the members of the French armed forces march, fly, and ride through their capital city. The parade starts at 10:10am, but be sure to get there early for the best views!

On July 14th, enjoy a free ballet performance at the Opéra de Paris. Featuring the works of choreographic legends Justin Peck and George Balanchine, this captivating matinée is a great way to start your Bastille Day celebration! The free show starts at 2:30pm, but space is limited, so get there early. You can find more information at the  official site of the Opéra de Paris. 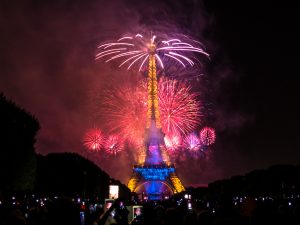 Head down to the Champ-de-Mars or Trocadéro to catch Paris’s annual fireworks display. This year’s theme Paris est une fête (“Paris is a party”) begins at 11:00pm and will feature approximately 35 minutes of dazzling pyrotechnic delights! Definitely a must see for all ages!

Fitting the party theme, the fireman’s ball is an annual favorite among Parisians and visitors alike.  On the nights of July 13th and 14th, head over to one of the numerous firehouses in Paris for a night of dancing in the City of Light! Beginning at 9:00pm, you can dance the night away until 4:00 in the morning each night for free, although most venues will ask for a small donation to the fire station. For a list of all firehouses Bastille Day celebrations in Paris, check out this article from the Paris Tourism Office.

How can we help ?