Claude Monet (1840 – 1926) is a French painter known for his art movement called impressionism. The name of the style derives from the title of a Claude Monet work: Impression, Sunrise.

He lived in Giverny from 1883 until 1926. He painted his house in the colors of his painting palette, designed his gardens with flowers and colorful vegetables, and built a pond. These incredible scenery inspired him to create artworks.

His son inherited his house and bequeathed the estate to the Académie des Beaux-Arts in his will when he died in 1966. Once the house and garden restored, in 1980, the estate was declared public and the Fondation Claude Monet was created. 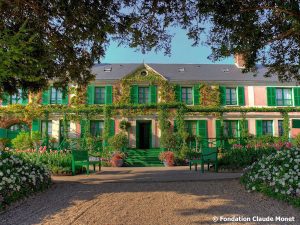 The place where Monet lived. Initially the house was smaller, so he extended it on both sides in order to have more spaces for his family and his works. He decorated and painted his house to his own taste and used color such as blue, yellow, pink… The house has, on the ground floor, a kitchen, a dinning room, the studio room, the pantry, the sitting room and, on the first floor, the family rooms. Note that the paintings in the house are reproductions as the real ones are in museums. 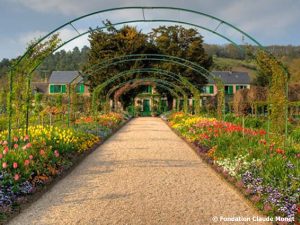 It is a garden with metallic hoops, trees and lots of colorful flowers such as cherry and apple trees, tulips, irises, daffodils, daisies, dahlias, peonies, nasturtiums, wisterias, poppies… 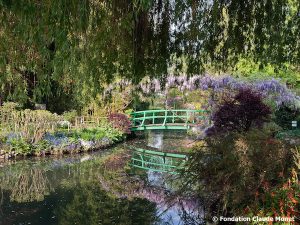 Monet bought a land with a pond at the back of the Clos Normand and built there a Japanese bridge. He designed the water garden with trees and flowers such as bamboos, cherry trees, maple trees, water lilies and other kind of lilies…

The Japanese Prints (Monet’s collection of ukiyo-e prints) and The Waterlily Studio (a gift and book shop).

While visiting the house and the gardens, you can see that he was passionate about gardening and that this area was an absolute source of inspiration for Monet. In fact, his gardens will inspire him to create artworks such as the water lilies series. The tour will leave you amazed.