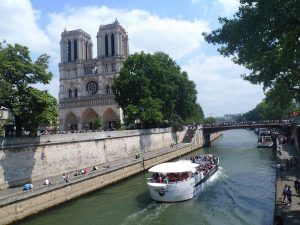 Embark on a boat at the foot of the Eiffel Tower and experience Paris in a 1 hour discovery cruise on the River Seine. Admire the iconic monuments such as the Eiffel Tower, the Notre-Dame Cathedral, Orsay museum along with others breathtaking treasures of the capital. Relax on the boat and enjoy the view while eating your lunch (sandwich, drink and dessert included).

Experience the city of love with a guided tour just for you and your loved one. Take a walk in Paris and make the most of your visit by admiring some hidden places besides its main sights.

Wondering where to buy good quality cheese in Paris? Questioning why Parisians carry a baguette with them everyday? Confusing the meaning of boulangerie and patisserie? Here is some vocabulary you need to know about Parisian food before coming to Paris.

Boulangerie is an essential part of Parisian life; it is the heart and soul of Paris Food. Did you know that on average, 25 million baguettes are purchased and consumed by the French every day? Every second, 320 baguettes are consumed. So, where do all French people buy their “vitamins”? At the boulangerie! Boulangerie means bakery, and it is the most common thing you will see in Paris. At this Parisian’s “favorite place of business”, you can easily buy three meals per day. A buttery croissant or a sweet pain au raisin at breakfast, a ham and melted cheese sandwich for lunch, and a baguette as a side dish for dinner.

When searching for your perfect loaf, make sure you patronized an artisanal bakery (Boulangerie Artisanale) to ensure the bread is made on site from scratch.

How sad would life be without little sweet treats? A patisserie will satisfy every sweet tooth! Want to know what kind of dessert you shouldn’t miss while in Paris? Read more about this facet of Paris food here. You can try some well-known brands like Pierre Hermé, Sadaharu Aoki and Jean-Paul Hévin, but you can also find pâtisseries in almost every bakery. You could even buy a sandwich and macarons to enjoy a picnic under the Eiffel tower!

Nowadays you will always find a Boulangerie and a Pâtisserie in the same place, selling small desserts and bread together.

If you understand how essential“Fromage” is in Parisian food, you understand the very core of food in Paris. The historical French love affair with cheese can be traced back as far as 8000 BC. Traditionally, there were 400 different types of French cheese – today there are close to 1,000 varieties. Can you imagine? Eating  1 different variety of cheese a day, that’s almost three years without eating the same cheese! Sounds like a good plan, doesn’t it? In France, cheese is usually consumed after the main course and before the dessert. Pair it with a good glass of wine to begin eating like a Parisian! And even though you can find cheese in every supermarket, a real “Fromagerie” is the first stop you should go to select the best quality cheese. 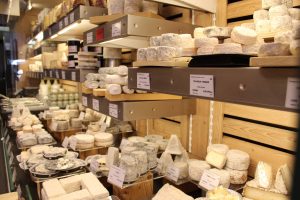 There are some more traditional, specific kinds of stores you will find in Paris such as boucherie, charcuterie, or poissonnerie. People now can find all types of food in giant supermarkets, however French people enjoy the shopping at these traditional specialty stores for high quality products. They like to go to specific stores and searching for their ideal ingredients.

This is where to go if you are looking for meat to prepare your next meal. In a “Boucherie” you can buy raw legs of lamb, steaks, chicken breasts, veal cutlets, and many other types of meats. 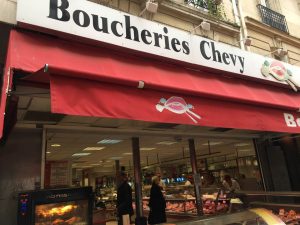 You may ask what is the difference between a butcher’s (boucherie) and a charcuterie? In France, a charcuterie is more like a deli that specializes in pork. At a charcuterie, you can get pâté, sliced ham, sausages, rillettes or even pig’s feet. 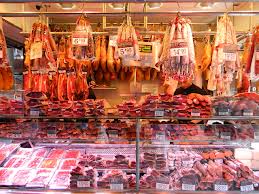 Nowadays, you can usually buy the 2 types of meat at the same place. On top of that, you will usually find Charcuterie-traiteur or Boucherie-traiteur on the names of these stores which stands for selling prepared dishes and small catering Paris food inside. 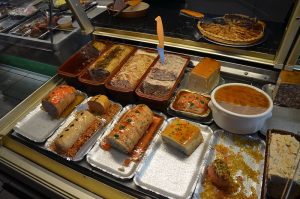 Poisson means fish in French and a Poissonnerie is a smaller scaled seafood market. Here you can buy fresh fish, seafood or prepared dishes. 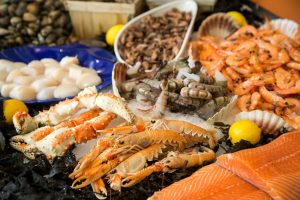 The name “bistrot” derives from the Russian word meaning “fast.” During the Russians occupation of Paris (1814-1818), Russian soldiers were not allowed officially to drink wine, but who could resist some good French wine? They could not, and would shout “Bistro!” to the waiters in order not to be seen by their officers… The name then began to describe little restaurants where you can have a meal or drink a glass of wine in no time. Nowadays, bistrot can be small cafés or restaurants in modest settings.  In a bistrot, you can find moderately priced simple meals. It usually serves home-style Paris food. 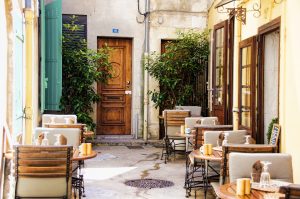 In a similar setting to a bistrot is a brasserie. Unlike the neighborhood bistrot, brasserie’s  are usually larger and generally serve food all day. Brasserie ( translation of breweries) were traditionally where beer was served, and often dated from 19th or 20th centuries. These days you can still get a beer at brasseries but now they usually accompany food. 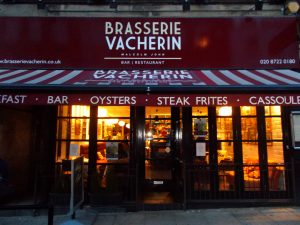 Epicerie in France is similar to the notion of a convenience store or a small grocery store. As French people usually say: “La petite épicerie du coin” ( The small grocery store around the corner). There are also large épicerie stores like Monoprix or Carrefour which are the equivalent of a supermarket.

Below is a table we made for you so you can better compare all these Paris Food vocabularies and use these words when you are in Paris next time!

Top Spots In Paris To Satisfy A Sweet-Tooth