Meet Stéphanie! She is a professional Paris photographer specialized in capturing your special moments in Paris, whether it is your honeymoon or a trip with friends or family. She speaks French, English, and German and she wants to give her clients the best experience! 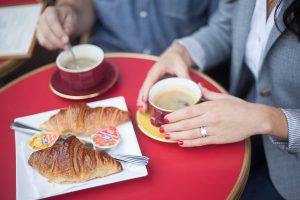 Which is your favourite type of photo?

“A 2 hour photoshoot really allows people to take their time while enjoying the present moment. I can shoot in 2 or 3 places in Paris. A photo session allows people to enjoy being in their bubble for a couple of hours, being connected to each other and to their feelings.” 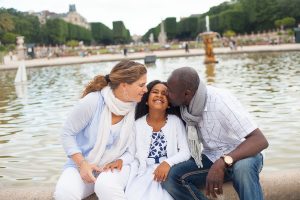 “I do love a lot of things in my job: meeting new and amazing people every time, discovering a couple’s or family’s story (everyone has its own story), creating a good atmosphere so people can feel at ease and relaxed (even in front of the camera). I also love to capture genuine emotions, feelings, gesture, glimpses, smiles, laughter, to make them last forever, create joyful, spontaneous and colourful images, and make people feel happy!” 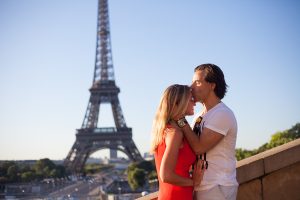 Why did you decide to do what you do as a job?

“I decided to be a professionnal photographer to create my perfect job and integrate my values into it. I share happy moments with people from around the world, have fun, capture love and happiness, create lasting memories for couples, families and friends. It gives a real meaning to my job…” 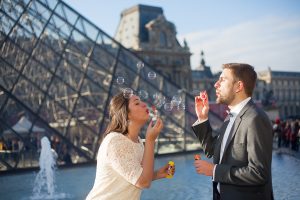 Do you have any particular method of work?

“I usually begin with a photo session with blowing bubbles. It allows people to get back to their childhood and lowers the pressure. It’s a perfect way to get relaxed and enjoy the present moment!”

Contact us now to book your photo session with Stéphanie!

Want to see more of Stéphanie work? Check it out here!

When in any big city, it’s important to know how to get around. Paris is no exception! However, with a vast array of transportation options, finding your way around the City of Light can easily become quite daunting. We recognize just how difficult this process can be and have created this guide to public transportation in Paris. Enjoy!

The RATP is the source of information for all public transportation in Paris. Check out their interactive map where you can view all the Paris transportation maps and routes (metro, tramway, RER, bus, night bus) and find the best routes to and from any two points. You can search routes in real time by entering your starting point and final destination on their Plan Your Journey page. You can also download two of the RATP’s mobile apps: Next Stop Paris and RATP to help you map out your route on the go. 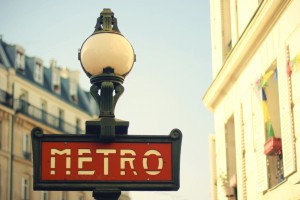 Easily the most iconic form of transportation in Paris, the metro is an interconnected underground network linking the city.  At first glance, the system of 14 subway lines can seem extremely complex to those new to Paris. However, it’s actually not as bad as it seems.

Keep in mind that only the RATP-issued maps are accurately color-coded, so be sure to look for the official RATP versions.

The metro closes at 12:30 pm weekday nights and at 1:30pm on weekend nights. It starts again at 5am. 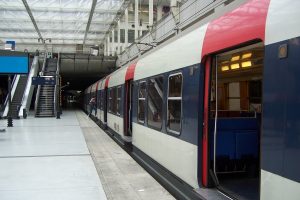 The RER system is similar to the metro, but is faster and extends past the Paris city limits. This is the transportation system you will take to get to locations outside of Paris like Versailles and Disneyland. The 5 main RER lines: RER A (red), RER B (blue), RER C (yellow), RER D (green), RER E (pink) can be found on the metro map (the four thicker lines on the map). As with the metro, the names and directions of these lines can be found at the ends of each line. However, as the trains extend past Paris, the metro map may not show all stops in between Paris and the last stop on the line.

With the RER, you really have to pay attention, as the ticket prices depend on which zones you are traveling to. These fast trains cover 5 zones as shown on the metro/RER map and tickets typically cover only 1 or 2 zones (whereas the passes cover all five zones) so if you venture outside of your covered zones, you will have to pay extra to get back into the city. 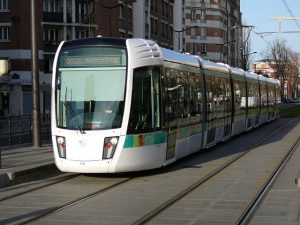 The tramway system is a means of transportation in Paris that tourists don’t typically think about. Unlike the metro or RER, the tramway is completely above-ground, offering spectacular views of some of Paris’s many bustling streets. Typically located along the outer border of Paris, the tramway features 9 lines that service several important entry points (known as ports) into the city.

The bus system in Paris is a bit more complex than the metro or RER. Bus stops are typically located around metro stations and each have a specific number and color. Figuring out which bus goes where can be kind of tricky, especially since the bus numbers are 2- and 3-digits long. However, maps and routes are located at each of the stops, so you will be able to determine if the bus is heading in the right direction.

You’ll get to see more of the city, as the buses travel along Paris’s many beautiful streets. A large screen displays upcoming stops so you’ll always be able to get off at the right stop. Before your stop, be sure to press one of the red buttons located next to your seat. This will signal an “arret demande” (stop requested) so that the bus driver knows to let you off at your stop. 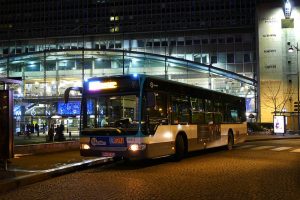 If you find yourself in Paris after the metro has stopped running, no need to panic! The Noctilien, or night bus, is a form of transportation in Paris operating between the hours of 12:30am and 5:30am. This bus line is not the best option if you are trying to get home during these hours. We recommend taking a taxi or Uber.

While Paris is home to numerous public transportation options, taking a taxi is still a popular choice. You can locate a taxi at one of the numerous taxi stations located all over Paris (click here for a map – in French only) operated by Paris Taxi. You can download the Paris Taxi app to see which taxis are available nearest you. Through the app, you’ll be able to specify number of passengers and bags to help facilitate your experience. There are two versions available: Paris Taxi (Apple Store) or Paris Taxi (Google Play).

Worried about the language barrier with your taxi driver? You may want to check out Taxi G7. They offer English-speaking taxi drivers and accept credit card payments, which most Parisian taxis don’t accept. You can download their app Taxi G7 (Apple) or Taxi G7 (Google Play) and can check out their fares here.

The French taxi system is highly regulated, so, as long as you’re taking a legitimate taxi, this form of transportation is very safe. If you ever have any problems, be sure to ask the taxi driver for their ticket which they are required to provide you with. This document has the contact information of both the taxi company and the driver, allowing you to report any sketchy activity. On a more positive note, you can ask for a ticket if you had an enjoyable transportation experience and want to request the driver for your next ride.

*Important* When taking a taxi from the airport (CDG or Orly) make sure to get in line for the legitimate taxis  OR to book your airport transfer in advance (this will help you skip the line). Otherwise the people who try and get you to take their “taxi” might charge you much more than normal. Don’t fall into this trap.

While in Paris you shouldn’t miss the Louvre museum! It’s the largest museum in the world, hosting more than 35,000 masterpieces and welcoming more than 9 million visitors per year.

What will you see ? 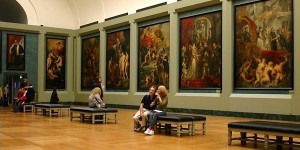 In the Louvre, you can see art from prehistory until the beginning of the XIX century.

You will discover paintings, sculptures, furniture and much more! There is something for everyone.

How to experience it ? 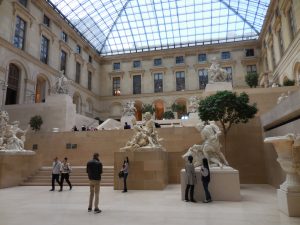 You should prepare beforehand and definitely book your ticket in advance if you want to skip the up to 2 hours long line. If it’s your first visit, we suggest you to focus on the main masterpieces tour, which allows you to see around 10 of the most famous masterpieces of the world in approximately 2 hours.

If it’s not your first visit or you want to take more time in the museum, we recommend that you prepare your visit in advance by checking out a map of the museum and planning what type of art you want to see (View museum map here). You can also arrange an official guided tour with the museum directly at the welcome desk, located by the ticket booths (price in addition to your entry ticket).

We recommend that you arrive in the morning to have plenty of time to enjoy the museum. There are places to get a snack just outside the entrance gate if you wish to spend the full day, like Starbucks. Keep in mind that the museum closes at 6pm and that the guards begin to empty the place approximately 30 minutes earlier.