Flavigny sur Ozerain is one the most beautiful villages in France. It boasts a unique historical heritage made of architectural medieval beauties. Furthermore, a characteristic of this area is also the anise, a plant which is distinct by fennel or star anise.(star anise comes from China). 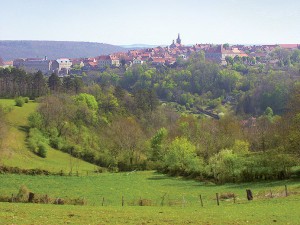 In this peaceful and charming village a small candies factory, “Les Anis de Flavigny “has established its house. In the following article we will display from the plant to the creation processing how these delicious candies are made up. 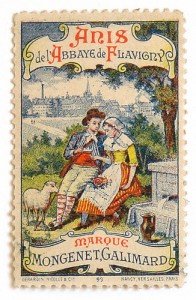 The factory located in Favigny sur Ozerain, is 60 kilometers away from Dijon and 1.30h from Paris by TGV. It is built up at 421 meters, on a promontory at the end of a limestone plateau.

Inside the factory the candies are prepared with white sugar since the discovery of beet sugar (around 1600). Before that, they used cane sugar. The anise is always prepared with sugar unrefined cane organicly certified by Ecocert. The anise of Flavigny is available with different flavors: anise the course, blackcurrant, lemon, orange blossom, ginger, tangerine, mint, licorice, rose and violet. The taste of aniseed drinks was introduced on the shores of the Mediterranean in ancient times, according to the Turkish and Greek domination. The cultivation of anise has thus gradually extended to the entire Mediterranean basin. 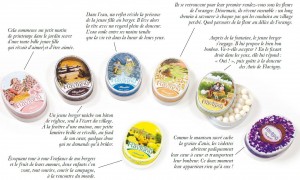 The natural flavors are extracted from plants by a steamed distillation with alcohol. For example, the processing for the pure mint is done in a still where the leaves and the water are heated and the steam developed by the leaves is responsible for the essential mint oil. The quantity of oil than can be produced with a ton of petals is based on different plants. All around the location the anise perfume, as the most used plant will stimulate your smell.

Run by a family for years 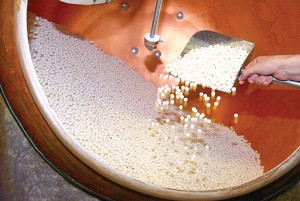 The factory has inherited three generations of knowledge carried forward by a team of 35 people. In 1923, Jean Troubat had the idea to sell the anise in the stations and underground of Paris and afterwards opened the first shop right there. In 1928 he distributed boxes of anise in United States, Canada, Algeria and elsewhere in Europe. Now the anise of “Les Anis de Flavigny” factory is sold everywhere in garden centers, organic stores, airports and railway stations.

Why visiting Flavigny sur Ozerain and the factory?

At the “Les Anis de Flavigny” further the anise’s factory you will have the opportunity to visit the others fantastic and grateful buildings which include the anise museum, the anise cafè, and the anise boutique. Hurry up to  get stocks of one of the most delicious type of candies in the world. Furthermore experiencing Flavigny sur Ozerain will be very delightful in order to stimulate your own senses. The Burgundy region, where the village is located, will give you the opportunity to know one of the best finest French cuisine and its huge variety of wines. You absolutely cannot miss Les Anis de Flavigny factory and its surrounding.

Guided tour behind the scenes from a professional guide