The Loire Valley has more than 150 castles so it is impossible to see them all. You should aim to see 2 or 3 castles if you are on your own or about 4 castles if someone else is driving, giving you time to rest in between.  You have a couple of options. You can either take a day trip to Loire Valley from Paris or stay at Loire Valley (in Amboise or Tours) for a few days. A good tip is to plan your Loire Valley day tour in advance for visiting the French castles (especially during the summer). 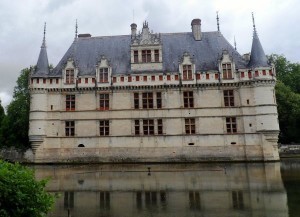 Château d’Azay-Le-Rideau was built between 1518 and 1527 by a rich banker – Gilles Berthelot.  Located in the west area of the Loire Valley, Azay-Le-Rideau is a prime example of an early-Renaissance château: with the intention of living a luxurious life, the craftsmanship of the stonework is breath-taking, as are the beautiful windows. As you climb up the Italian-styled loggia staircase, you can admire the central courtyard and the staircase itself, which is also decorated with salamanders and hermines of François I.  The castle was so luxurious that the king, François I, seized it, causing its owner to flee. By  some miracle, the castle managed to survive the French revolution, making it an example of the royal lifestyle between the 16th and 19th centuries.

Recommendations to visit the Château of Azay-Le-Rideau (€8.50): There is no need to get an audioguide, as every room has panels that explain them well in English. A good place to start would be the castle attic, after which you can make your way down through the luxurious Renaissance rooms, where you can admire the fine tapestries and fireplaces. Make sure you don’t forget to walk around the romantic and peaceful garden, designed in the 19th century. 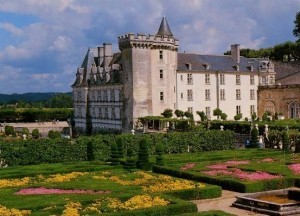 Villandry is the second most visited castle in the west side of Loire valley. It is famous for its extensive gardens, considered to be the best in the entire Loire Valley. Finished in 1536, Villandry was the last great Renaissance French castle built on the Loire. As another project financed by François I, the château and gardens were inspired by Italian Renaissance. The landscaped gardens are some of the finest in France, occupying 6 hectares, filled with beautifully manicured lime trees, ornamental vines, and fountains.

The castle was built by Jean Le Breton, the finance minister of François I.  Jean had served in Italy as an ambassador and had fallen in love with Italian Renaissance gardens. He razed the XIIth century castle that existed on the land, keeping only the old tower, to put up his own while designing Renaissance Italian-style gardens.

Recommendations to visit the gardens of Villandry (€6.50 gardens only): Get the handout included with your admission ticket that will guide you through the gardens. The flowers, fountains, tunnels and even herbs seem to live in harmony. There are 85,000 plants, cared by 10 full-time gardeners. 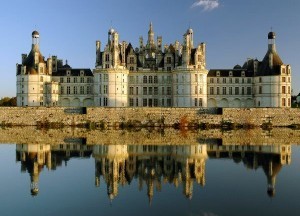 With its huge scale and prickly silhouette Château de Chambord is the most famous in the Loire Valley. It is surrounded by the largest park in Europe, which brings serenity and splendor to the impressive castle. Chambord is one of the crowning examples of French Renaissance architecture, and by far the largest and most visited castle in the Loire Valley. The castle has some 440 rooms, 365 fireplaces and 84 staircases. No to mention the turrets, chimneys, and a famous double-helix staircase.

The castle was built between 1518 and 1532 by François I for his personal weekend retreat. During the construction, 1,800 workmen were employed. The grand architectural plan of the château, modelled after an Italian church, was a way to show off his power.

Recommendations to visit the château of Chambord (€11): The free handout is pretty good. You should however consider getting an audio guide (€5) or booking a guided-tour (€7) as the castle interior is mostly empty and you will need a proper narration so as to imagine how it was.

Gracefully arching over the Cher river, Chenonceau was nicknamed the “château of the ladies”, as it housed many famous women over the centuries, while their husbands were away on the king’s business. Find a riverside view of the château that will allow wonderful pictures. You will be swept up in the magical architecture and the glorious surroundings: exquisite formal gardens and landscape parkland.

Along with Chambord, Chenonceau is one of the most visited French castle. Chenonceau was the first castle in France to be built for pleasure only. There is no defensive equipment. In 1547, king Henry II gave it to his mistress, Diane de Poitiers until the King died and she was kicked out by the King’s wife, Catherine de Medicis. The masterpiece of the castle is the three-story Grand Gallery, 200 feet long that spans the river. One can imagine the grand banquets that were hold there.

Recommendations to visit the château of Chenonceau (€12.50): the iPod video audio-guide (€4.50) is worthwhile, to wander through the fascinating interior. There’s also an audio-guide for kids. Alternatively, you can download the tour from the apple store for free to your mobile device.

You can see these French castles on a map of Loire Valley by clicking on the link.

Photos from the Loire river