Looking for an off the beaten track destination? Visit Pere Lachaise Cemetery! This old cemetery is very large and has 70,000 burial plots. Some of the most influential writers, painters, musicians, and politicians in history—many of whom continue to fascinate and are legendary—are eternally sleeping within this cemetery. Here you can find all types of funerary art style.

Within its walls lie many of the most celebrated luminaries the world has ever known. Established in 1804, Père Lachaise is the largest cemetery in the city of Paris – 44 hectares or 110 acres. 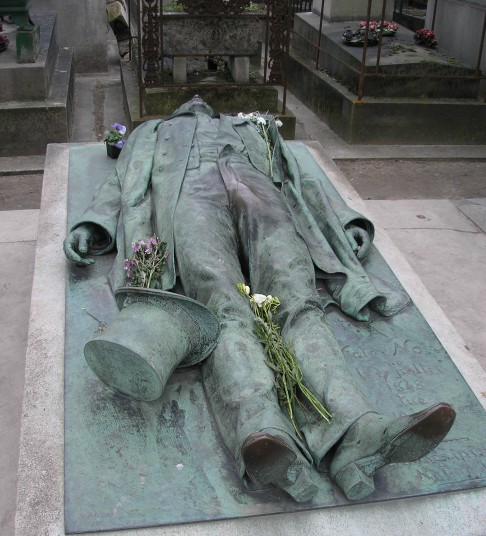 1848-1870 French journalist famous for how he died and politics surrounding. Tomb is a symbol of fertility.

The tradition goes: If you want to find a beautiful lover, you should kiss his lips, if you want to get pregnant, just touch his right foot, if you want to have twins, touch his left foot. A beautiful replica adorns the tomb, similar to as he would have laid dead in the street in his finest suit with his hat fallen beside him.

1915-1963 French cabaret singer/songwriter and actress who became widely regarded as France’s greatest popular signer. With songs like La Vie En Rose you can listen to her enchanting voice and here the passionate power with which she sings. Her voice possesses a fast vibrato and lots of emotional sentiment. Listen here.

1622-1673 French playwright and actor who is considered to be one of the greatest masters of comedy in Western literature. Molière is also considered to be the creator of modern French comedy. Tartuffe is just one example of his hilarious comedies where he mocks the religious hypocrite. 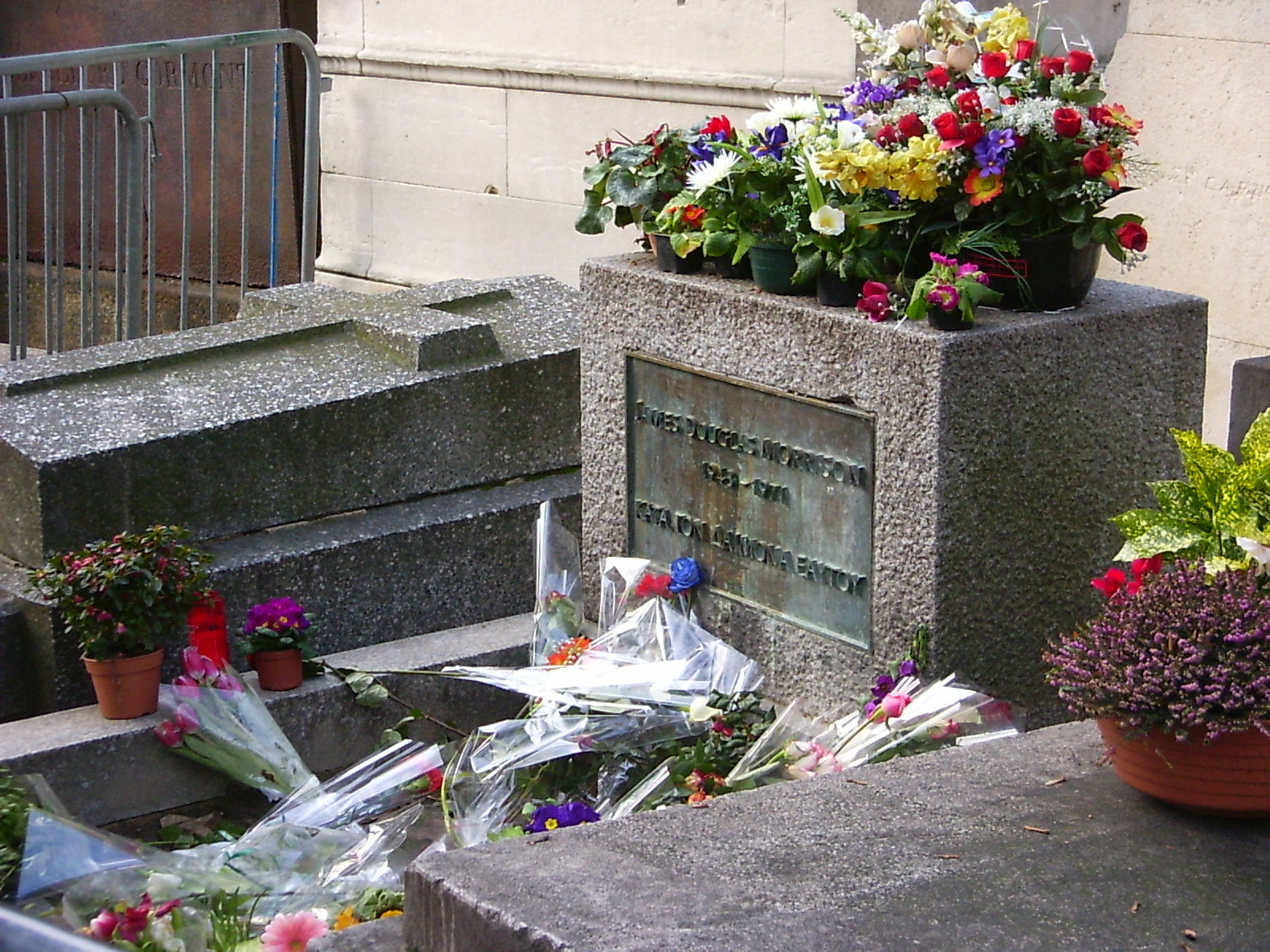 “Expose yourself to your deepest fear; after that, fear has no power, and the fear of freedom shrinks and vanishes. You are free.”
-Jim Morrison

1943-1971 An American singer/songwriter and poet. Perhaps the most famous grave in Paris. Morrison died in a bathtub in Paris, and his gravesite in Pere Laichase been a pilgrimage site for The Doors fans (and drunkards in general) ever since.

Jim’s grave continuously had many fans decorating it– as well as points throughout the cemetery – with graffiti. People still share beer with the singer, by pouring half the contents of the can over his grave. The grave’s headstone translates to “true to his own spirit.” There is also a tight security in and around the area surrounding his grave. 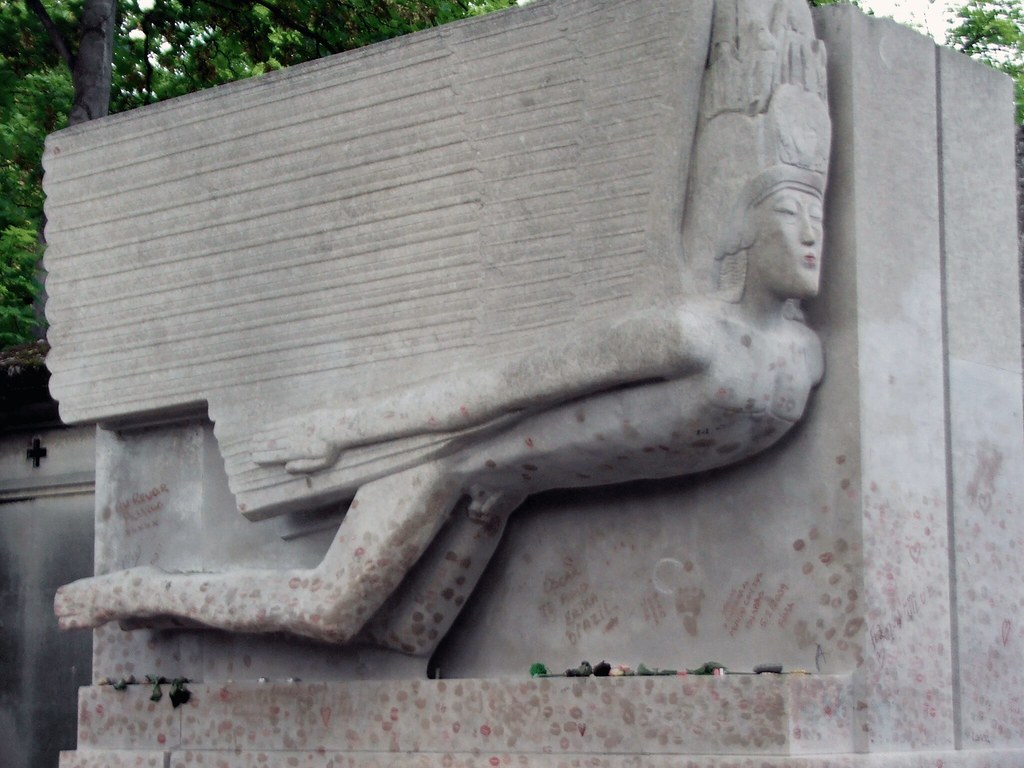 “We are all in the gutter, but some of us are looking at the stars.”
-Oscar Wilde

1854-1900 An Irish poet, playwriter, and novelist. It is said that Wilde died in a Parisian hotel. His grave is represented by an angel bearing the weight of the rock.  People leave fresh flowers, tissues with color-stained kisses, and letters. The cemetery officials have put up a glass encasing around the grave, and people now write their messages on the glass.

1810-1849 A legendary Polish musician and composer. Admirers regularly leave bouquets of flowers all over his already quite lovely grave. If you visited his grave today you’d think he’d just died last week from the amount of flowers that have been left there.

The love story between Abelard and Heloise is one of the best known romances of the Middle Ages. The letters exchanged between them during the course of their lives are precious still and are read far and wide. In 1817, the bones of the two lovers were buried together under a grand tomb. Lovers now leave letters at the tomb of these two great lovers.

1791-1824 An influential French painter. His ‘Raft of the Medusa’ is one of the most visited paintings in the Louvre. Gericault’s tomb in Père Lachaise is magnificent; the monument has reclining bronze of Géricault, on top, with his paint brush and palette in his hands.  On the side of the tomb there is a bronze version of The Raft of the Medusa, so that everyone passing may see his genius.

Raft Of Medusa- by ParisByM

‘The real voyage of discovery consists not in seeking new lands but seeing with new eyes.’

1871-1922 A French novelist, critic, and essayist best known for his legendary work In Search Of The Lost Time. Known for his detailed, and inspiring analysis into human mind, Proust is known as one of the greatest authors of 20th century. Unfortunately, Proust died before he was able to complete the last of his drafts of the final volumes. The last ones where published posthumously by his brother, Robert.

1799-1850 A famous French novelist and playwright. One of his most well-known publications is The Human Comedy.  Balzac’s headstone is made of  bronze placed upon a pillar with a quill at base. Even if you are not that interested in discovering the tombs f these 10 famous people buried in the Père Lachaise cemetery, you can still visit the cemetery to enjoy a peaceful walk in the beautiful park and admire the monuments, some of them simple and small, some of them huge: it is not uncommon to have see family graves which can be be reopened to enter another coffin. Some multi-family tombs even contain dozens of bodies, in separate but adjacent graves. Shelves are usually lined up to board them.